Start-Up Weekend Host on board for GEW 2014 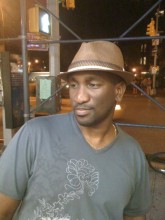 As articulated in earlier features, Global Entrepreneurship Week which will be hosted from November 17th – 23rd, 2014, is a global celebration of entrepreneurship. It’s an event which provides golden opportunities for entrepreneurs to do many things including showcasing their talent, networking with and motivating each other. In Trinidad and Tobago, it is no different! Thirty-five (35) year old Gerard Thomas has always been both an avid supporter and contributor towards the success of GEW. From the early age of 16, Thomas was clear that he wanted to become an entrepreneur. According to Thomas, a former student of Fatima College“at the end of my stint at Fatima College, it was either that I start my own business or I migrate to study.” His second option became a reality as he got an opportunity to study Computer Science at South Carolina State University.

Having completed his programme successfully at SCSU, Thomas’ got another opportunity! This time to work at Merrill-Lynch/Bank of America. But during his six-year stint there, his dream of starting his own business was still alive. He then returned to Trinidad and  now heads Launch RockIt, an NGO which focuses on hosting entrepreneurial events aimed at building entrepreneurial communities throughout T&T.

Thomas’ association with GEW is very profound, as he hosts his annual “Start-Up Weekend” which starts on November 21st and ends on November 23rd, 2014  and is aimed at encouraging and demonstrating to entrepreneurs, how they can build their businesses over one (1) weekend! According to Thomas “the process is simple; young aspiring entrepreneurs bring their ideas to the event on the Friday, and by Sunday, those ideas are transformed into prototype.”

Because of his passion for developing young entrepreneurs, his involvement in GEW 2014 is much deeper.  Thomas will be collaborating with GEW Host, Youth Business Trinidad and Tobago (YBTT) to host the National South Symposium themed “The Perfect Pitch.” This initiative is targeted towards developing young students both secondary and tertiary, as well as other aspiring entrepreneurs who need to know how to effectively pitch their ideas, break them down, refine and re-pitch those ideas.

Thomas strongly believes that entrepreneurship in Trinidad and Tobago is evolving. “I think that entrepreneurship is moving in the right direction, but we need a lot more support from private sector, because in the next few years, private sector organizations will need to hire more entrepreneurially-minded individuals in order to keep their businesses competitive as well as sustainable.” He also alluded to the fact that GEW allows organizations involved in entrepreneurial development, to showcase the services available to entrepreneurs which is aligned to this year’s theme for GEW – “Get Connected…Start Now.”